On the topic of death 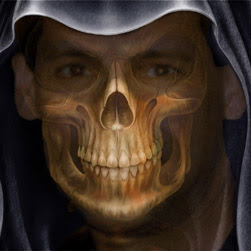 A lot of people see death as bad or sad.  But death is part of life and if you love life, you have to love death.  Now *how* you die..., that can be very sad.

Also, people see death as being nothing.  But there are 2 arguments against that.

1.  Why would the elements in the periodic table assemble themselves (not only to create life but) to create life that is able to think?  And how can a bunch of atoms come together to experience life and contemplate death?  You can think of the universe as a single body.  And we are part of that body just as your cells are part of your body.  When a cell dies, it is reabsorbed by the body and becomes something else.

2.  Mass and Energy are different sides of the same coin.  You can think of matter as frozen energy.  And neither one, matter and energy, can be created nor can they be destroyed.  So that person that is you just becomes something else.  But that should not be scary because you are already different than when you were a baby (for example).  You can't even remember being a baby.  So that person you were as a baby is the person you are now (which is something/someone else).

Babies seem eager to become older and be able to walk and talk.  They want to become something/someone else.  Some children/teens are eager to become adults.  It doesn't matter whether you are eager or not, it will happen.  And when it does, you realize that the transformation was not that bad.

So..., to recap..., you cannot be destroyed.  You don't become nothing.  You simply become something else.  A different state of being.

Now..., do you retain your memories?  Maybe.  But it doesn't matter.  You don't remember being a baby and you're not bothered by that.  If you are a teen, you only remember a fraction of your childhood.  Maybe you retain none of your memories, maybe you retain some.  Scientists say that memories are stored in the brain.  But maybe they're wrong.  Maybe there is such a thing as a soul that stores memories and can retain those memories after death.  Or maybe the memories are also transformed into something else so that you can retain them.  For example, you can store data on a CD, DVD, or thumb drive.